City council extends deadline for unsafe structure
By Jeff Myrick
September 9, 2010
Owners of a building deemed to be an unsafe structure in downtown Baldwin City have another 30 days to come up with a plan to fix it — whoever those owners might be.
Neis year for new police chief
By Jeff Myrick
September 9, 2010
Police Chief Greg Neis has just finished his first year at the helm of the Baldwin City Police Department and it’s been a good one. It’s also been a new experience. Neis’s career in law enforcement, which began in 1977, has included stints with the Douglas County Sheriff’s Department and 13 years with the Eudora Police Department, the last five as sergeant.
In this battle, Baker beats Ottawa
By Jeff Myrick
September 2, 2010
A trio of Ottawa men got more than they bargained for early Sunday morning from a pair of Baker University fraternity members.
Expect delays on Douglas County roads
By Jeff Myrick
September 2, 2010
Starting Tuesday, motorists who travel between Lawrence and Baldwin City on County Roads 1055, 458 and 460 will have to get used to construction delays.
What brought the Methodists to Baldwin City?
By Jeff Myrick
August 26, 2010
It’s easy to see that Baldwin City is a Methodist stronghold, but why is that? All one has to do is look at the numerous churches to see it. First United Methodist Church. Ives Chapel Methodist Church. Vinland United Methodist Church. Worden United Methodist Church. Clearfield United Methodist Church.
Brown wins national award as director
By Jeff Myrick
August 19, 2010
This year, Sue Brown took it to another level. The Vintage Park Assisted Living director went from the state’s best to the nation’s best. Brown was named the winner of the National Centers for Assisted Living Director of the Year award and will be recognized at the national convention in October in California. Last year, Brown won the state version of the director of the year award.
Weather doesn’t shine on Vinland Fair
By Jeff Myrick
August 19, 2010
Mother Nature didn’t exactly shine on the 103rd Vinland Fair last week, but it still ended up being its annual success. “I think we had a pretty good fair,” said Mike Craig, co-president of the fair board with his wife, Julie.
Moore reflects on Vinland Fair tractor pull
By Jeff Myrick
August 12, 2010
When it comes to the Vinland Fair’s tractor-pull competition, no one can hold a candle to Max Moore. Moore, who is 92 years old and still actively farms his 300 acres just north and west of Baldwin City, was on the fair board when the idea was hatched to have a tractor pull back in the early 1960s.
Baldwin City mill levy to rise 1.895 mills
By Jeff Myrick
August 5, 2010
It came as no surprise that the mill levy for Baldwin City took a jump this year by 1.895 mills. Last year, the mill levy used to raise taxes went down slightly to 30.538 mills. This year it went up to 32.433.
Baker named one of Midwest’s best colleges
By Jeff Myrick
August 5, 2010
Baker University has been named one of the top 152 colleges in the Midwest by The Princeton Review. The news came Monday on the its website, PrincetonReview.com. 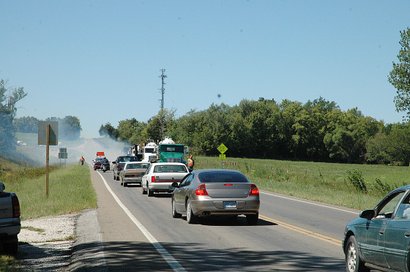 A pilot car leads traffic around resurfacing work that's underway on U.S. Highway 56. The resurfacing crew had made it to the Baldwin Elementary School Intermediate Center by around noon Friday. Motorists can expect delays along the highway through October. 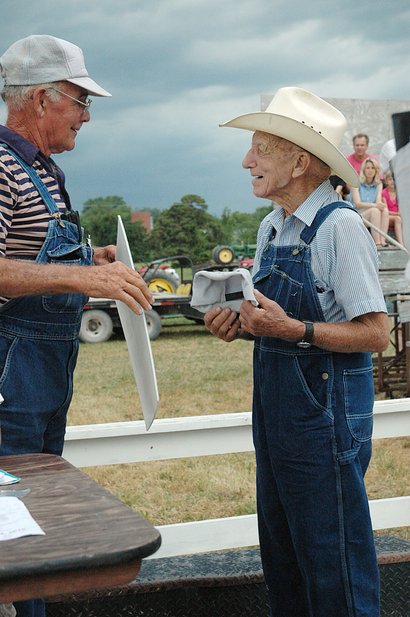 Larry Craig, left, a member of the Vinland Fair board, presents Max Moore with a hat and a placard to commemorate him winning the first-ever tractor pull back in the mid 1960s. 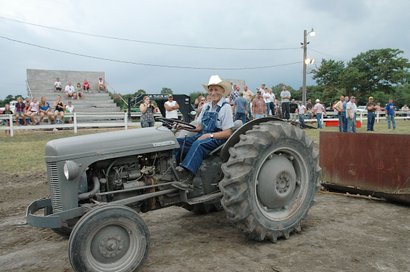 Max Moore, who is 92 years old and still farms, was on hand for the antique tractor pull at the Vinland Fair. Prior to the start of the event, he used his 1950 Ferguson to pull the sled that was used back when the event was started in the mid 1960s. Moore won the first-ever tractor pull and earned 50 silver dollars. 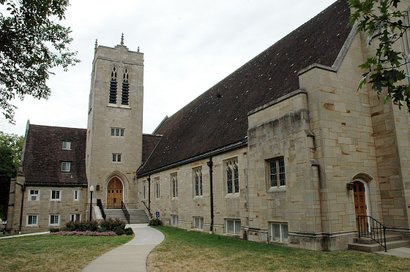 Baldwin City’s long history with the Methodist Church dates back to before the town was founded and before Baker University was established in 1858. When the original church back then burned to the ground, it was replaced with the current First United Methodist Church, which stands next to the university in downtown Baldwin City to this day. 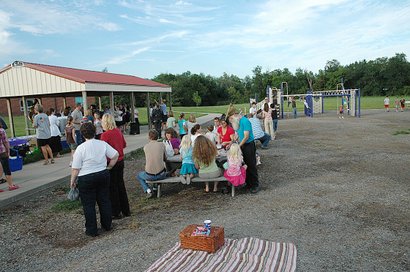