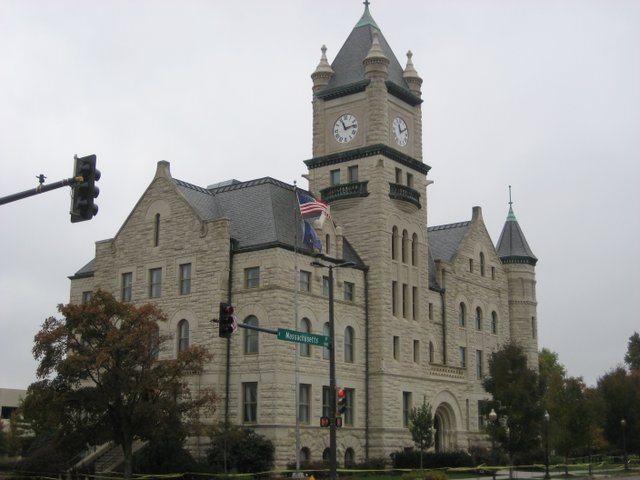 Designs, cost estimates for potential Douglas County jail expansion may be ready by early next year

Preliminary designs and cost estimates for the county's potential jail expansion and mental health crisis intervention center projects may be ready early next year, it was revealed at a town hall meeting Monday evening.

County commissioners on Wednesday unanimously agreed to waive a bidding process for the Douglas County Sheriff's Office so the agency can sign with a new inmate medical services provider quicker than normal.

The county's sustainability office is working to figure out the next steps for any potential large-scale wind farm operations in Douglas County.

McFarlane Aviation hopes to break ground on an expansion project before winter hits, after Douglas County commissioners unanimously approved its construction plans during their weekly meeting on Wednesday.

A nearly $200,000 federal grant awarded to the Douglas County Sheriff's Office on Friday will help divert an estimated 25 people each month to treatment alternatives to jail.

Lawrence and county commissioners discuss ways to deal with the over-population of the Douglas County Jail and community mental health issues, a new option may become a topic of conversation after four community leaders attended a national conference recently.

"There are a lot of big requests and a lot of things to balance, so it's a tough one," she said. Because the county's proposed 2016 budget has not yet been finished, Weinaug said it is difficult to estimate the request's possible impact on property taxes. However, if approved, the request could potentially increase property tax rates by more than half a mill.

A delegation of Douglas County leaders will travel to San Antonio next month to examine how that community has changed its law enforcement and judicial systems to cut down on the number of mentally ill defendants who end up in jail.

Douglas County to have townhall meeting on jail expansion

Douglas County is inviting the public to participate in the first of a series of town hall meetings to solicit feedback on a proposed county jail expansion and the construction of a mental health crisis intervention center. The meeting will run from 6-7:30 p.m. March 23 in the commission chambers at the Douglas County Courthouse, 1100 Massachusetts St.

The leaders behind a proposal to expand the Douglas County Jail and construct a mental health crisis intervention center know there's a need for such an undertaking and that it must be acted on soon. But for now, they just want to understand it.

East 1700 Road improvements About a three-mile stretch of East 1700 Road, between North 400 Road and North 700 Road north of Baldwin City, will be "busy all year," according to Keith Browning, the public works director. Culverts and pavement will be replaced, shoulders constructed, trees removed and a bridge replaced to improve road safety. Timeline: Construction will last from March through the end of October. That stretch will be closed off for much of that time, Browning said. Price tag: A total of $2.38 million, with more work coming for E 1700 Road in 2016 and 2017.

The community building at Lone Star Lake will soon be a rentable space for the public after the Douglas County Commission signed off on the idea Wednesday.

The Douglas County Commission stayed in step with other local governments on Wednesday evening when it approved a reduced tax incentive for a proposed $75 million mixed-use apartment complex on Indiana Street.

Douglas County commissioners to work on spending, taxes as they consider 3.86 mill increase

Douglas County commissioners on Tuesday will consider a proposed budget that includes a property tax increase of 3.86 mills. Commissioners Mike Gaughan, Nancy Thellman and Jim Flory will go through the county's budget and approve spending priorities and a tax rate that will be set for a final vote in August. The meeting starts at 8:30 a.m. in the County Courthouse.

Douglas County Clerk Jamie Shew on Wednesday announced an effort to cure what he says is an inequity in the state law that requires people who are registering to vote to provide a birth certificate to prove U.S. citizenship.

Douglas County Administrator Craig Weinaug said Tuesday that the commission would hold the rescheduled meeting at 8:30 a.m. July 15 at the County Courthouse, 1100 Massachusetts St. The commission will recommend changes to the preliminary budget, which will not be finalized until August.

Craig Weinaug is currently helping craft his 23rd county budget and never before in his career as Douglas County administrator has a budget proposed a higher increase in property taxes than this latest one, he said Monday.

Story: Link Italics Bold Bulleted list Numbered list Block quote Heading Create inline: A Baldwin City mom admitted in court documents to letting her teenage daughter and underage friends party at her home one night last summer as she drank along with them. Yet Sherry Haskell was not found guilty of unlawfully hosting minors consuming alcohol.

The Douglas County Board of Commissioners took a step closer to solving its agritrourism regulations snafu Wednesday when it received recommendations from the Lawrence-Douglas County Planning Commission.

Douglas County commissioners to be briefed on heritage grant program

Cultural and natural conservation grants to be awarded in May

Douglas County officials may have to sacrifice some of the historic character of Lawrence's century-old county courthouse to comply with the state's new concealed carry gun law.

Douglas County commissioners gave their blessing today to Baldwin City's plans to issue $5 million in industrial revenue bonds to finance construction of a fiber-optic broadband network in the community.

Within in the county's 2014 budget is $44,102 in new funding for The Shelter Inc., an agency that provides services to juvenile offenders and children in need of care.

Hearing on budget set for July 31