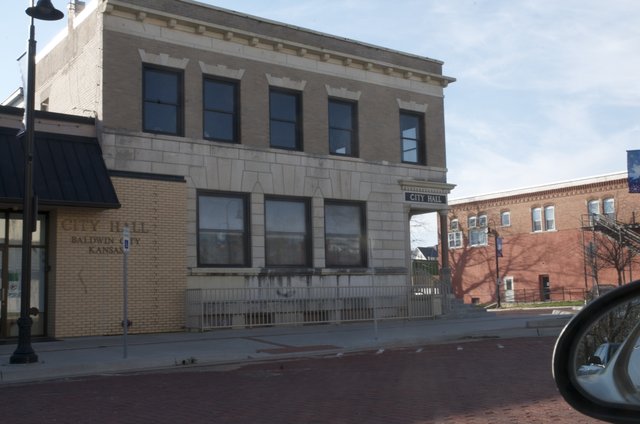 The Baldwin City Council on Monday gave initial approval of an agreement that will provide the city a place to keep stray or lost dogs.

In what is an all-but-certain step toward a future sewer rate increase, the Baldwin City Council hired a financial firm to conduct a rate study of the city’s sewer and water utilities.

The Baldwin City Council agreed Monday to help the Baldwin City Chamber of Commerce realize a longtime goal with an agreement to help fund the salary of a full-time chamber director.

Baldwin City’s annual fall street repaving program will start a bit later this year because of construction on the South Lawrence Trafficway. Baldwin City Administrator Chris Lowe connected the dots to those two seemingly unrelated events. The city found contractors too busy with the SLT project to take on the added work in Baldwin City, he said.

Although Monday’s agenda was basically a replay of the one before it Sept. 2, the Baldwin City Council With no new business on the agenda, the only action items before the council were a number of second readings of ordinances passed two weeks earlier.

Baldwin City Council members engaged in a rare public disagreement Tuesday during a discussion about the planned new sidewalk along U.S. Highway 56 from 11th Street to the Baldwin Elementary School Intermediate Center campus. The council has approved $125,000 in the 2015 budget for the design and construction of about 2,000 feet of sidewalk that will link the west USD 348 campus the new sidewalk constructed last year as part of the U.S. 56 improvements.

Meeting to start at 7 p.m. at Baldwin City Library

The Baldwin City Council’s routine approval Monday of its consent agenda brought rare applause from the audience. The applause was for one measure approved with the consent agenda, an agreement that will allow R.G. Fiber L.L.C. to install gigabit capacity fiber-optic cable on city right of way.

The Baldwin City Council will consider on Monday a 2015 budget that would increase the city’s property tax levy to 27.490 mills, or a 3.609 mill increase from that of 2013. That increase is not the result of a budget that buys a lot of nice new things — none of the facility projects scheduled for 2015 in the five-year capital improvement plan the council approved in February will go forward next year — but is the result of a shrinking tax base and inflation, Baldwin City financial director Brad Smith said.

The Baldwin City Council approved on Monday an agreement with the city of Lawrence to relocate out of the Baker Wetlands the 12-inch waterline that provides water to the city. City Administrator Chris Lowe said the agreement requires Baldwin City to pay $50,000 of the project’s $160,000 cost.

Although there was nothing related to a possible Wal-Mart Express on the agenda, the Baldwin City Council got a taste of what residents think about the proposed store during the public comment period of Monday’s council meeting. Thirteen speakers went to the podium to go on record in opposition to the proposal during public comment time near the end of the meeting.

Baldwin City to refinance last of its existing debt

The Baldwin City Council gave city staff the authority Monday to move forward with the refinancing the last of city's existing bonded debt. City Administrator Chris Lowe told the council the city’s financial consultant, Tom Kaleko of Springsted Financial, estimated the refinancing of the remaining $5.5 million owed from a 2005 20-year $9.1 bond issue for electrical improvements would save the city $533,000 as it was retired in the next 10 years

Baldwin City may purchase electricity from a local solar array if an arrangement the Baldwin City Council moved forward Monday comes to fruition. The council agreed to excute a letter of intent with Cromwell Environmental that could have longterm consequences on how the city purchases outside electrical power but which, for now, only commits the city not to enter into an agreement with another solar power contractor for a year.

On Monday, the Baldwin City Council approved the second reading of an ordinance that will pass savings in the cost of energy to large commercial customers after first amending the measure.

Baldwin City Council agenda for May 19

Baldwin City passes on saving in electrical cost to customers

The Baldwin City Council voted Monday to pass along its savings in the cost of energy to its largest customers. The council approved the first reading of an adjustment to the city’s electrical rates, which gives large users a break on the demand charge they are asked to pay.

On Monday, an application to rezone a property on the southwest corner of High and Ninth streets that would have allowed a duplex to be built on the lot failed to win the Baldwin City Council’s approval, despite having the support of the majority of council members.

Glass recyling bin to be moved to Baldwin City Market

The final day for paper, cardboard, plastic and glass recycling bins at the Ottawa Street recycling site will be April 30, the Baldwin City Council was told Monday. But there was good news for local recyclers. City financial director Brad Smith said Ripple Glass and Baldwin City Market have reached an arrangement that will spot a glass recycling bin in the grocery store’s parking lot.

The Baldwin City Council approved rewording Monday of a 2013 bond issue to allow use of leftover money on other projects, but it was the capital improvement plan approved last month that dominated the night's discussion.

The Baldwin City Council on Monday unanimously approved an $18.2 million, four-year capital improvement plan while advising the public not to read too much into that dollar figure. Mayor Marilyn Pearse said the CIP was a planning document that would be a tool for staff when preparing budgets and for the council in establishing priorities. None of the proposed projects have been approved, and the CIP could be adjusted as the city’s circumstances and priorities changed, she said.

Count Baldwin City officials as among those unhappy with a measure introduced in the Kansas Legislature that would prevent the state’s municipalities from bringing or helping bring broadband Internet to their communities.

Meeting set for Tuesday because because of Martin Luther King

$1 increase for trash service for 2014 on agenda

Nine homes approved for southwest of Fremont and 12th streets

System should be in place for Maple Leaf Festival

Measure to lower speed limit and restrict parking on Washington Street on agenda.

Public hearing for 2014 budget on agenda

Winners get credit toward future bills

New mayor, council members to be sworn in

First reading of authorization of long-promised bond sale to be on agenda.

Ande Parks will not seek re-election to school board

Wagner opts not to seek re-election as Baldwin City mayor

Banning parking on Eisenhower north of Ames to be considered

The Baldwin City Council put in place Monday the last piece needed to bring a dinner train to Midland Railway.

A visioning study released last week foresees Baldwin City becoming by 2020 a destination for new residents, visitors and jobs and the city enjoying a quality municipal workforce and improved infrastructure.

Non-binding resolution of support to be one council's agenda Oct. 1

Douglas County will help the city with its costs in the coming realignment of the High Street/U.S. Highway 56 intersection.

2013 budget, negotiations of "initiatives" for dinner train on council's agenda

The Baldwin City Council approved Tuesday a 2013 budget for publication that cuts the city’s overall spending while increasing the mill levy by 0.572 mills to 33.778 mills.

The Baldwin City Council gave initial approval Monday to a charter ordinance intended to make the city less friendly to those it puts in jail.

The Baldwin City Council has agreed to discuss with sculptors a proposal to create statues in downtown Baldwin City or its parks.

At the conclusion of their second visioning workshop Tuesday, Baldwin City Council members foresaw the city of the near future being the best bedroom community possible and one that has a new business park.

A Baldwin City business looking to expand is asking the city for a $10,000 loan while seeking to take advantage of an economic development program made available last year.

What appeared on the Baldwin City Council’s agenda to be a routine approval of an engineering agreement led Tuesday to a promised review of how the city will award such contracts.

After touring the unused upstairs at City Hall, two Baldwin City Council members are suggesting it may be time to renovate the space.