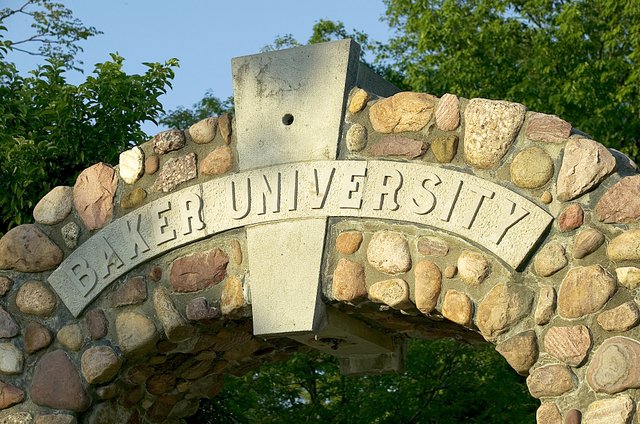 As if on cue, two of her instructors interrupted Angel Woods’ post-graduation explanation of what made her years at Baker University special. After sharing hugs with the instructors, Woods, who was one of 181 Baker students to receive undergraduate degrees Sunday with the conclusion of the fall semester.

Baker University’s fall semester commencement will be Sunday at the George F. Collins Sports and Convention Center on the Baldwin City campus. There are 181 undergraduate and 197 graduates students who are candidates for degrees.

A little more than a month into his college experience, Baker University freshman Mitchell Lierz is about to get more value from dorm living. As of Tuesday, RG Fiber had two operating connections providing gigabit Internet capacity to Baker’s Baldwin City campus, said Mike Bosch, CEO of the Baldwin City-based RG Fiber. With a few tweaks, that service will be available on campus and the 500 of the school’s 900 students living in its on-campus dorms or apartments.

Walking from class Tuesday on the Baker University campus, freshmen Michael Mitchell, Mason Baum and Kasey Oehlert agreed one thing brought them to the Baldwin City school. “I’m planning a nursing career,” Mitchell said. “They have a great nursing program here. I think you’ll hear the same thing from all three of us.”

The Baker University Community Choir begins rehearsals for the 2015-2016 season on Thursday, Aug. 27. Membership is open to all singers 15 and older.

The Baker University student newspaper was recognized with two contest awards in the past week. The Baker Orange won the All-Kansas Award as the state’s top private college newspaper at the Kansas Collegiate Media spring conference in Wichita. The Tulsa Press Club named the Orange website the Great Plains Journalism Student Website.

The No. 7 seeded Baker University women’s basketball team ended its national tournament run on Thursday afternoon in a, 52-47, loss to No. 2 Oklahoma Baptist in the First Round of the 2015 NAIA Division I Women’s Basketball National Championship Presented by the Susan G. Komen Foundation of Grater Kansas City at the Independence Events Center.

al Community Wellness Festival, sponsored by the Baldwin City Recreation Commission and Baker University, is scheduled for 9 a.m.-noon, Saturday, April 18, at the Collins Center, Sixth and Fremont streets, on the Baldwin City campus.

In its home opening doubleheader, the Baker University baseball team split its two-game series with rival Ottawa University, as the Wildcats won game one, 3-2, and fell in game two, 4-1.

Nineteen local students were among those named to the Baldwin University Dean's List from the College of Arts and Sciences and the School of Education for fall 2014 semester. To earn the honors, a student had to have a 3.5 grade-point average for the semester.

Baker gathers in mutual support at time of canceled inauguration

On the day and hour Baker University was to celebrate the inauguration of a new president, the Baldwin City school came together for mutual support after the death of a student.

The inauguration of Baker University President Lynne Murray scheduled for today has been canceled following the death of a student at the Baldwin City campus. It a statement released last Wednesday night, Murray said she made the decision to cancel her inauguration with news of the death of sophomore Sione Maumau.

Baker University football coach Mike Grossner has led his team to the No. 2 ranking in the NAIA, the program’s highest mark since he took over the Wildcats’ head-coaching job in 2004.

Leonard Ortiz, associate professor of history and the Susan Perry chair of the American West at Baker University, has been elected to the board of directors for the Kansas Humanities Council.

Baker moves up in NAIA poll after road win

The Baker University football team moved up in the latest NAIA Coaches’ Top 25 poll with its win Saturday at Evangel. The 3-0 Wildcats haven’t been in this spot in the poll since they finished as the national runner-up in 1986.

As they walked between classes Wednesday on the Baker University campus, freshmen Amanda Love and Rachel Lund were already aware the school had been named the top regional university in the state and the 44th such university in the Midwest. Moreover, the two freshmen said they were aware Baker was on the list last year when they were deciding where they would go to college.

Baker soccer starts season with 1-1 tie The No. 8 ranked Baker University men’s soccer team began the 2014 season with a 1-1 tie at home against unranked Missouri Baptist inside Liston Stadium on a ho

The No. 8 ranked Baker University mens soccer team began the 2014 season with a 1-1 tie at home against unranked Missouri Baptist inside Liston Stadium on a hot Friday evening.

Before becoming a professor in 2005 at Baker University, Joe Watson worked 15 years in television news and four years in public relations.

Baker football team to start season ranked No. 5 in NAIA

After a 2013 season that featured a school-record 11-2 record, a HAAC regular season championship and a NAIA-FCS Playoff victory, the Baker University football team will begin the season ranked No. 5 in the latest NAIA Football Coaches’ Top 25 Preseason Poll.

Colleges of Distinction, a guidebook highlighting four-year colleges and universities that are considered “hidden gems,” has recognized Baker University in its 2014-2015 publication.

Baker University is mourning the loss of its longtime men’s and women’s cross country coach and track and field coach Zach Kindler, who died suddenly Monday night after a medical emergency.

Baker's online MLA program recognized as one of nation's best

Like many other busy adults, Cheryl McCrary was concerned her full life would further delay her goal of earning a master’s degree.

Baker to play in Arrowhead this fall

The Heart of America Athletic Conference and the Kansas City Chiefs have partnered to present the inaugural NAIA Gridiron Challenge at Arrowhead, a football doubleheader to be played on Saturday, Oct. 11, at Arrowhead Stadium. The 2014 matchups of two highly-anticipated NAIA contests are scheduled for 3 p.m. and 7 p.m. Missouri Valley College will square off with MidAmerica Nazarene University in the opener, before Baker University faces off with Benedictine College in the nightcap.

Event to be Jan. 30 on the Baldwin City campus

Year of split leadership ahead for Baker

Baker to announce next president

Person to succeed Pat Long to be introduced Thursday

Last of 3 finalists for Baker president to be introduced today

Carolyn Stefanco, vice president of academic affairs and dean at Agnes Scott College in Decatur, Ga., to meet public at 4 p.m. at the Collins House.

Second finalist for Baker president to be introduced at 4 p.m.

Baker's education dean and director of health services to retire

Pair have been with university 25 and 30 years

Survivors tell their stories in play

Jacobsen to be recognized for work with International Relations Council

350-plus students to receive degrees in Baker University fall commencement

Baker University’s fall commencement ceremonies will be Dec. 15and 16 at the George F. Collins Sports and Convention Center on the Baldwin City campus

Baker to feature jazz this week

Baker to have blood drive Monday

Former Baker to among Wildcats inducted into the school's sports hall of fame during ceremonies Oct. 5.

Clash with undefeated Missouri Valley next for the Wildcats

New faculty to be recognized

After leading the Baker University volleyball team to a 2-2 finish at the Northwestern College Tournament over the weekend, the Wildcats Renata Dill was awarded the Heart of America Athletic Conference Libero of the Week award.

Baker University finished as the state’s best NAIA athletic program after fielding some of the nation’s most successful teams in the 2011-2012 academic year.

Baker University will honor nearly 700 graduates with two commencement ceremonies on Saturday, May 12, and two ceremonies on Sunday, May 20, at the Collins Cente

Ceremony to be May 19

This tentative list of graduates includes the names of students who submitted an application to graduate by the deadline to be included in the printed May 2012 commencement program:

February is Black History Month, and for Baker University’s Mungano that means it is one of the busiest times of the year.