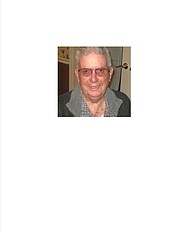 Stephen graduated from Baldwin High School then went to serve his country in WW II, earning the Purple Heart. Once he returned to the states he attended Baker University for a year as well as the University of Kansas for a year. He was a proud veteran of the United State Army. He was also a member of the Ives Chapel Methodist Church of Baldwin City.

On November 5, 1961, Stephen was united in marriage to Carmen Elaine Whitley in Baldwin City, Kansas. They shared over thirty five years of marriage until her death in October of 1997.

Stephen is also preceded in passing by his parents; and two brothers, Tom Hobson and Gene Hobson.

Funeral services will be held at 11:00 a.m., Thursday, December 31, 2015 at Ives Chapel Methodist Church, Baldwin City. The family will meet with friends prior to the service at the church at 10:00 a.m. Interment will follow at Prairie City Cemetery, Baldwin City. The family suggests memorial contributions to Ives Chapel Methodist Church or American Legion Lloyd Beaton Post #228 c/o Lamb-Roberts Funeral Home, P.O. Box 64, Baldwin City, Kansas 66006. Condolences may be sent to the family through www.lamb-roberts.com.