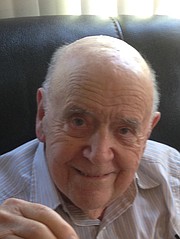 No formal services are planned for Joe. He died Saturday December 19, 2015 at Bridgehaven Memory Care Home.

He graduated from Wyandotte High School in 1940 and then attended Baker University, where he met his wife to be Betty Sharpe, they were married in July 20, 1942 and enjoyed 67 years of marriage.

Joe was a member of Kappa Sigma fraternity. Joe was a pilot in WW2 and The Korean War, in the Air Force. He retired from the service as a Lt. Colonel in 1966 and the family moved back to Baldwin. He obtained his Master’s Degree from KU in 1967 and went to work for Cook Paint in Kansas City, as their Labor Relations Manager and personnel Director. He retired in 1979. He then began his 3rd career as a volunteer. Joe loved helping others and gave the majority of his time doing just that. He was involved with the Baldwin City Library, Red Cross, Baker University, First United Methodist Church, KC Eye Bank, Council of Aging, United Way, Kappa Sigma fraternity, Douglas County Senior Services, and many more.

He loved to tend his flowers and have his morning coffee with friends. His sense of humor will be long remembered by any who knew him.

He leaves behind a son Joseph Anthony Simunac lll and wife Kristin of Palm Harbor, Florida, Daughter Emily Honse and husband Bob of Lawrence, grandchildren Joshua Sinnard (Baldwin City), Nicholas Sinnard (Lawrence), Kate Sinnard (Manhattan) and Clara Simunac (Palm Harbor, Florida). Great grandchildren Alexis Benimon and Max Sustaita both of Manhattan, as well as several cousins and many, many friends. He was preceded in death by his parents and wife, Betty.

The family would like to thank all of the staff at Bridge Haven Memory Care for the love and attention given to Joe in the last two years.

Memorials contributions may be made to Lawrence Humane Society or Bridgehaven Memory Care Home.

Online condolences may be sent to www.warrenmcelwain.com.