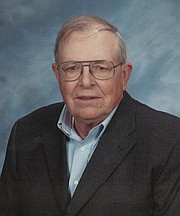 Memorial mass for G. Robert “Bob” Butell. 82, Baldwin City, Kansas will be held 10:00 am Friday, December 11, 2015 at Corpus Christi Catholic Church. Inurnment will follow at Oak Hill Cemetery. He died December 7, 2015 in Baldwin City, KS.
He was born March 23, 1933 at Baldwin City, Kansas the son of George H. and Ethel A. (McWilliams) Butell. He graduated from Baldwin High School in 1951. Mr. Butell received a bachelor of science degree from Rockhurst College in 1955, an MBA degree from The University of Kansas in 1962, and a MS degree in agricultural economics from Kansas State University in 1964. He also did additional graduate study at Georgetown University.
He was on the 1951-52 Rockhurst College Basketball squad.
Mr. Butell served in the U.S. Navy from 1955 to 1959 with the rank of Lieutenant JG.
He was an agricultural economist who retired in 1987 following nearly 23 years of federal government service. In 1964, he joined the Farm Credit Administration in Washington, D.C. In 1967, he joined the U.S. Department of Agriculture’s Economic Research Service in Washington D.C. His work there included commodity situation and outlook.
In 1979, Mr. Butell returned to the Kansas City area to serve on the staff of the Federal Grain Inspection Service. After retirement, he remained active on his farm at Baldwin City, Kansas.
Mr. Butell was a member of Corpus Christi Catholic Church, Lawrence, Kansas, the American Agricultural Economics Association and the National Association of Retired Federal Employees.
Memorial contributions may be made to Corpus Christi Catholic Church and may be sent in care of Warren-McElwain Mortuary
Online condolences may be sent to www.warrenmcelwain.com.