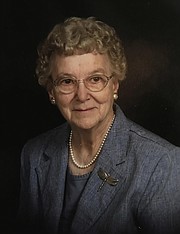 Rose Marie (Newland) Cook was born September 16, 1927 on a farm near Baldwin, Kansas to parents Charley Otis Newland and Blanche Elizabeth LaDuke Newland.
She lived in various places in Kansas as her father worked as a foreman over the mules and horses used on road construction crews in the 1930’s. She moved to Braymer, Missouri, in November of 1937 from Abilene, Kansas.

Rose Marie graduated from Braymer High School in 1945 and returned to Baldwin, Kansas. At 17 years of age, she began teaching in a one-room school house (including teaching her sister, Charlene) while taking summer classes at Baker University. She then went on to teach at Edgerton, Kansas and Osage City, Kansas.

Rose Marie worked for and lived with a “wonderful old couple”, Fred & Jessie Wightman, in Braymer, Missouri while attending high school. She also remembered a special teacher, Lee Simkin, in Braymer.
She completed her Bachelor of Science in Education in 1968 at Emporia Teachers College and her Masters in Early Childhood Education in 1980 at Emporia State University. She also completed a Masters in Special Education with an emphasis on Learning Disabled in 1985 at Emporia State University.

Rose Marie taught from 1982-1992 in the Davenport, Iowa, school system—making a total of 33 years teaching, with long runs in the third grade, the fifth grade, kindergarten and junior high emotionally disabled classes.

Rose Marie is preceded in death by an infant grandson, Corban Jonathan Cook; a foster daughter, Barbara Ann Martinez, her husband Richard, and their son Richard; her parents, Charley and Blanche Newland, her brother, Leonard Newland, and his wife Myrtle Lee.

Condolences may be sent through www.lamb-roberts.com.

Rose Marie is perhaps best remembered by the phrase oft used to describe her:

“She never met a child she didn’t love.”