The search for a missing toddler, now presumed dead, on a rural Ottawa property where three bodies were discovered this week expanded today to involve the Federal Bureau of Investigation and as many as 150 law enforcement officers in helicopters, planes and on horseback. 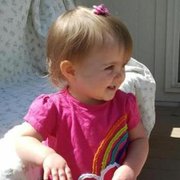 Lana-Leigh Bailey is the 18-month-old daughter of Kaylie Bailey, who officials have confirmed is among the three victims in an Ottawa triple homicide. Franklin County Sheriff's Office announced Thursday morning that Lana is presumed dead. Photo courtesy of Kansas Bureau of Investigation

Franklin County Sheriff Jeff Richards said efforts to find 18-month-old Lana Leigh Bailey are "ramping up" and will continue until dark tonight. But, he said, the deaths there can now most likely be called a quadruple homicide. And the crime scene has expanded far beyond the house where two of the bodies were found.

Meanwhile, Franklin County Attorney Stephen Hunting said a suspect in the killings of Lana Leigh's mother and two men in and around the house on Georgia Road must be charged within 48 hours of his arrest this morning at about 4:30 a.m.

Investigators believe 18-month-old Lana-Leigh is the fourth victim of the homicides in Ottawa, and they arrested Kyle T. Flack, 27, of Ottawa, who had been held for questioning since Wednesday, on suspicion of first-degree murder. Flack, who spent time in prison for a 2005 attempted murder, was booked into Franklin County Jail this morning on suspicion of first-degree murder.

Lana-Leigh's mother, Kaylie Kathleen Bailey, 22, of Olathe, was one of three homicide victims whose bodies were found earlier this week at a home at 3197 Georgia Road, five miles west of Ottawa. The other victims were Andrew Adam Stout, 30, of Ottawa, and Steven Eugene White, 31, of Ottawa.

Stout and White lived at the house where the bodies were found; Bailey apparently was Stout's girlfriend.

Franklin County Sheriff Jeff Richards, at a news conference Thursday, said the National Center for Missing and Exploited Children was sending a team to the area to assist in the case. Officers from police departments in Emporia and Overland Park, as well as the Johnson County Sheriff's Office, have joined the search and distributed a flier with Lana-Leigh's information and picture.

The search for Lana and other evidence in the case has grown across the 4.7-acre property and beyond, across woods, pasture, and streams. The investigation could also lead to suspects other than Kyle Flack. "We're obtaining search warrants for various things," Richards said Thursday. "We're not just going to focus on the one person we have in custody."

Flack was taken in for questioning early Wednesday as a "person of interest" in the case. He was located in Emporia early Wednesday, as was Kaylie Bailey's car, which was also being sought in the case. Richards said Thursday that investigators were looking for anyone who may have seen Bailey's car, a black 2007 Toyota Corolla with duct tape on the passenger side mirror. Investigators have also widened the crime scene around the west Ottawa property where the bodies were found.

'His own mother was scared of him'

Flack's relationship to the victims is unclear. He served four years in prison for the 2005 shooting of Ottawa resident Steven Dale Free, 47, who was found in his front yard with multiple small-caliber gunshot wounds. Flack was convicted in Franklin County of attempted second-degree murder and was paroled in 2009. 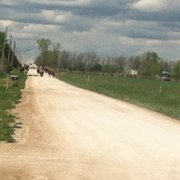 Police on horseback search on and around the crime scene's surrounding areas Thursday afternoon on the 3100 block of Georgia Road, as airplanes search overhead. The crime scene, where three bodies were found, has been extended nearly out to the intersection of Georgia Road and Highway 68.

Stephanie Ingram is Steven Free's sister, who was friends with Flack's mother. Ingram said Steven hired Flack to work with him doing handyman jobs but fired Flack for substandard work. The day he was shot, Steven Free was shooting pool in the garage and Ingram heard what she thought were fireworks. Flack had shot Steven Free five times and walked away.

"He was pretty messed up in the head," Ingram said. She told the Journal-World that Flack was working with the Franklin County Mental Health Department with a caseworker and was on medication. When the shooting happened, she said, she believes they were adjusting Flack's medication.

"His own mother was scared of him," Ingram said.

Michelle Free, Steven Free's sister-in-law, told the Journal-World she wasn't surprised when she heard Flack may have been involved in the Ottawa homicides.

"We just feel sorry for him. He's not normal," she said. She added he was wrapped up in drugs and a little slow mentally and "that tends to lead to bigger problems."

Michelle Free also said Flack had no remorse after shooting Steven Free. "He acted like it was completely normal," she said.

Franklin County Attorney Stephen Hunting said his office is reviewing the case to determine what charges to file against Flack, who is not yet represented by a lawyer. Hunting and Richards declined to provide details about a possible motive or information about a cause of death in the case. Leads continue to come in on the case, they said.

The adult homicide victims were discovered Monday and Tuesday, but not positively identified until Wednesday.

Lana-Leigh was reportedly last seen alive on April 28 at the Georgia Road property. She was reported missing along with her mother on May 3. Friends say Bailey may have gone to the Ottawa house where the bodies were found to drop her daughter off with Stout to baby-sit.

In Olathe, Kaylie Bailey's family lit a candle for the deceased 22-year-old mother Thursday afternoon and held out hope for the child's safe return. Neighbors and relatives stopped by their home with food and a few kind words.

"We're all supporting each other, and that's the most important thing, said Shawna Pettijohn, Kaylie Bailey's sister. "We've had a lot of outreach from friends and family, which we appreciate."

The Kansas Bureau of Investigation declined Wednesday to issue an Amber Alert for the missing child because her image had already been widely circulated by the media. However, all other measures taken in the case of an Amber Alert were in effect, the KBI said.

Friend and relatives of the victims became worried last week when they hadn't heard from the three for several days. Police checked the Georgia Road property Sunday after Stout’s childhood friend Corey Schlotzhauer — looking for his missing friend — visited the property and noticed a strong smell.

“I know if it’s that strong it’s not an animal,” Schlotzhauer said. “And it’s not trash.”

However, police did not find any bodies after that first call by Schlotzauer, who returned Monday with two friends and discovered a bloated female body in the garage, under a blue tarp. Police then returned to the scene and located the two other bodies.

It's not the first time Ottawa has been tormented by a mysterious triple homicide. The 1973 killings of three local people found shot to death in a car off U.S. Highway 59 in Ottawa remain unsolved.

The Ottawa homicide victims have ties to multiple criminal activities, though it’s not clear how, or whether, any of them are related to the deaths on Georgia Road.

Kaylie Bailey married 25-year-old Shawn Patrick Bailey in 2011 and divorced him in March. Shawn, the father of Lana-Leigh, has been in a Missouri jail since January following a burglary arrest in Lebanon, Mo. Shawn was arrested with relative Cyle Bailey, 23, who had been imprisoned with Shawn for their role in a 2008 burglary in Franklin County.

Cyle Bailey had also initially been sought by police as a “person of interest" in the Ottawa homicide. However, police canceled that request Tuesday after speaking with Cyle.

Stout, meanwhile, was the fiance of an Ottawa woman killed in 2009. Mark Aaron Sherman was convicted of shooting and killing Stout’s fiancee, Sky Nicole Cadarette, 19. Stout’s sister, Amberly Stout, had two children with Sherman, who was paroled in January.

White, one of the victims, had a lengthy criminal record, and had spent time in prison on theft, drug and arson convictions. White was most recently released from prison in November 2009.

Richards said his office is receiving assistance in the case from a wide variety of area law enforcement officials, who continue to work the crime scene. The sheriff's office is expected to update the public with more information at 4 p.m. Thursday.

Anyone with information about the case is asked to call the Franklin County TIPS Hotline at 888-311-TIPS.