The young adults at Van Go Mobile Arts are best known for their pieces of brightly painted furniture. But on Thursday, a crew of four put down their paintbrushes and picked up hammers to learn the ancient art of blacksmithing. 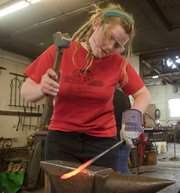 Since December, a group of Van Go artists has been visiting a forge to learn the trade of blacksmithing. It's a project that will have them working on a gate that will mark the Battle of Black Jack near Baldwin City.

It’s an art that requires both a forceful hand and a delicate touch.

“You are painting something, it’s just with iron and fire,” said 19-year-old Heng Liu.

Every other Thursday since December, the Van Go students have been making the short trip to Walt Hull’s forge in Pleasant Grove. They will become part of a group of blacksmiths from across the world that will craft a gate at the site of the Black Jack Battlefield, just outside Baldwin City.

Like most people, the Van Go artists were at first nervous around the blazing fires and were timid with the hammering, instructor and local blacksmith artist Kate Dinneen said. But then they picked up the key to blacksmithing.

“It’s a really good way to get out your aggression,” Dinneen said.

It’s a skill that 20-year-old Tandy Myers never thought she’d acquire. But her friends think it’s pretty cool since they are into heavy metal (the musical variety, not the trade).

This May, Kate Dinneen hopes to gather more than 50 blacksmiths to build a gate to welcome visitors to the site of the Battle of Black Jack near Baldwin City.

Before the gate can be built, more than $30,000 needs to be raised in the next few weeks.

A rough economy coupled with the state’s recent cut for art programs has dampened fundraising efforts.

“We are desperately in need of money at this point,” Dinneen said.

Contributions to the Black Jack Battlefield can be made online to blackjackbattlefield.org.

When Miquel Brown told his friends that he was learning how to blacksmith, they asked if he was making medieval knight suits.

“I never really thought about blacksmithing. I thought it was a dead art. Like machines did everything these days,” Brown said.

On Thursday, it was obvious the art was alive and well as the group pounded out leaf-shaped designs for the battlefield gate.

The work is definitely more physical than other art forms, said 20-year-old Danielle Volle. But like painting, there is a flow and smoothness to blacksmithing.

“But that’s really it. You are not painting with a hammer,” she said.

Jordan Ryan, an Americorps volunteer who works with the group through Van Go, said that because the art form was foreign to everyone, she saw the artists’ creative process and personalities come out in the past few months.

“You see a smile on their face as they really get to wailing on it and another side of them comes out,” Dinneen said.

This is totally cool. It's wonderful seeing another generation learning a traditional skill.