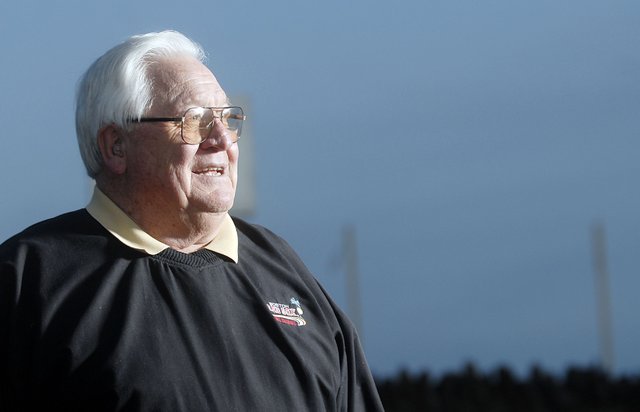 Legendary Baldwin High School football coach Merle Venable will have the sports complex around the high school named after him. The Baldwin School Board approved the motion at its Aug. 9 meeting.

After months of discussion by the Baldwin School Board, Merle Venable is one giant step closer to being honored by his former Baldwin High School football players.

Scott Lauridsen, school board member and former BHS football player, brought his proposed naming facilities policy to the Aug. 9 meeting, hoping for the school board’s approval. In the end, he did receive a unanimous vote, but it wasn’t on his new policy.

“I’m trying to de-scope this back to the original intent, which was an athletics facility naming policy,” Lauridsen said at the meeting.

Soon after the policy was read, Board Member Ruth Barkley threw out her opinion on the topic.

“I’m ready to have a naming policy in place and I’m tired of tripping over the small details,” Barkley said. “I think it should be at the discretion of the board, period.”

During the past several months, Barkley was one of the board members who tried to expand the policy. At a previous meeting, she said a generic policy left the school board open to anyone with a proposal to honor someone. She was afraid that it might get out of hand and force the school board to make tough decisions. She wanted more criteria to make the policy more specific.

Supt. Paul Dorathy even gave his advice on the subject.

“I’m not sure we can’t just go back to the original suggestion,” he said. “That takes us right back to where we were this winter.”

Lauridsen said he was fine with going back to the original policy, which stated that proposals for naming facilities in the district need the school board’s approval.

“I’m very happy,” Lauridsen said after the meeting. “It was a little bit surprising, but I think that’s how it’s supposed to work. The board thought about it and talked about it, but then came back to what it thought was the appropriate policy. The process took longer than we thought, but I appreciate the fact that we went through the process. Whatever board members are sitting in those seven seats have the final say anyway.”

Lauridsen said the facilities inside the complex might be named later, but the entire complex is named after the former BHS football coach. He also said there will be no cost to the district for approving this. He said any signage would be paid for by private funds.

“There’s a large group of people that is very interested in supporting this,” Lauridsen said. “I’ll probably reach out to some individuals who have already offered up some skill sets they had to do that. We’ll put something together to bring to the board for approval. Then I imagine we’ll have some sort of recognition ceremony. I could see doing it at a high school game, where more people are going to be. It’s more about the recognition than where it’s held. We don’t have a football field, so here’s the next best thing we can do.”

Venable came to BHS in 1966 and left in 1984, but came back as a substitute teacher for many years. During his 19-year tenure, he was head football and track coach every year. He led the Bulldogs to a state football championship in 1981 and they were state runners-up in 1971 and 1978.

Once again the school board has taken an action to benefit a very small group. Over the past 5 months there were very few complaints about establishing a policy for naming facilities, but there was much discussion on how and who to name facilities after.

What we have here is a school board that just completed a sneak pass over the heads of the citizens that had called for more inclusion in naming facilities, instead what we got was a small "live in the past high school glory days" group who named a major school facility to glorify their era and shove aside more than 20 other graduating classes who might just have thought they had great teachers and coaches also.

This is not a criticism of Mr. Venable. He is the innocent victim of the process. The process was a sham and embarrassment. Let's not forget that Mr. Venable was fired from his teaching and coaching position. This was publicly reported at the time.

There are numerous equally qualified teachers, coaches, administrators who from 1900 to 2010 who were never even discussed. The are at least 25 graduating classes that were never consulted. The process was a sham.

The Signals endorsement of this facility naming shows the lack of knowledge about some of the historical facts involved.

So now we have a school board that fails to seriously deal with this issue because they seem to be tired of it and we have a small group of coach worshipers making decisions for 1000's of BHS graduates.

No one should be proud of this process or the outcome. Shame on the lack of good governance.

So who would you rather have make the decision? Should they send out a mailer to every Baldwin High graduate ever? Seems like an inefficient way to accomplish the same thing.

Let me tell you something else. I went to Baldwin High in the past 10 years, not in the 70s and 80s, and I had the great experience of having Merle Venable as a substitute teacher. So before you go saying it's all about people reliving their old glory days, maybe you should stop and think. I never played football for the guy, but having him in the classroom and talking to him around the community has shown me there is nobody that better represents Baldwin High than Merle Venable.

It also amazes me that people can get so bent out of shape over something so trivial as naming a facility after someone. Have you ever heard of "picking your battles"?

Sorry, but I agree with the op this is something that should have been proposed to the community as a whole and not just settled by the school board with out consulting the community in some fashion.

They could have asked for petitions from the community had ballots at sporting events and asked the attendees to write in their votes. A variety of methods could have been used in order to make this decision.

As far as the op picking their battles I guess they did and this was their issue they wanted to fight on, what might be trivial to you might hold some significance to others.

From observing other schools around the country I don’t see many carrying on the Name of a teacher.But I have seen names of deceased – Veterans – or historical local people – Consider naming some your building after - deceased Veterans , or Police officers , just my opinion !

1776: Don't assume that all school board members see things the same way.

The Baldwin School Board should be embarrassed and ashamed for their action. I agree with “1776attorney”. Perhaps not so much for establishing a building naming procedure, but for the sneaky and self-serving way in which it was accomplished.

Although I believe the whole concept of naming school district buildings for any past or present school employees is wrong and narrow-minded, in the future it will also prove to be a disaster that will divide the community and cause in-fighting. And it’s completely unnecessary. It's a man-made disaster.

Since 1910, there have been at least 30 high school coaches worthy of this same honor. During Mr. Venable’s tenure alone there were state champions in basketball, cross-country, tennis, wrestling, golf and similar championships in girl’s sports. Mr. Venable’s accomplishments were identical, not singular, to other coaches during his tenure and certainly not when compared to all school district history.

While Mr. Venable’s accomplishments do deserve commendation and praise, he is not alone in representing the school district in achieving great athletic awards.

Every single era in Baldwin High School history had teachers and coaches equal to or better qualified in their achievements and performance when compared to Mr. Venable. In the 1950’s and 1960’s the school district had stellar coaches winning state championships.

The action of the School Board is nothing more than allowing Mr. Lauridsen an opportunity to ram through his favorite coach and re-live his high school glory days while ignoring thousands of other graduates and athletics whose voices, opinions or votes were never even solicited or considered. He represents his little group and not the whole district and all alumni as he should.

In no way is Mr. Venable to blame. It’s unfortunate the actions of the School Board have caused his name to be mentioned and discussed in an embarrassing way. But in order to discuss their actions, Mr. Venable must be included.

These actions may make a very small group happy, but a much larger community is not so approving.

OK, by your yardstick nobody's name should go on this. Name me one other coach from BHS whose team outscored his opponents 450-22 over a 9 game season and who won two state championships (granted, one via the press, no playoffs) and was in the state championship hunt much of the time for decades. Name one. I'll gather up every single BHS player who played under Coach Merle that I can and we'll show up to support this. We are legion, like it or not -and we will be there.

I guess this is more of a reason to vote out the current school board and get rid of the current administration.

Pointing out that other coaches have had more success winning state championships shouldn't have violated any posting rules.

Torch. . . Your post is under the editorial "good board decision." Don't get all bent out of shape.

Thanks GreatGazoo. Forgot where I put that.

By the way I wasn't bent...if you've been around long enough you'll know when I am.

Thanks for the laugh, Torch. Actually, I agree with you. I think some day both Zuzzio and Spielman should have similar honors. Years after retirement, such as Venable.

I agree with Jeff. Spielman should have similar honors.