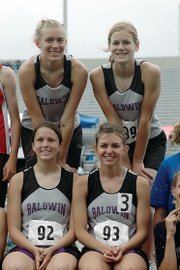 All in all, BHS won four events and placed runner-up in another. Senior Heather Garcia won the 1,600- and 3,200-meter runs for the third consecutive year. She also finished second in the 800-meter run after coming back from being bumped during the race's final lap. She did set a school record in the race with a time of 2:15.29.

The final event for BHS might have been the most exciting for the Bulldogs. After a trio of great performances by the first three runners, senior Dustin Schiller anchored the boys' 1,600-meter relay to a victory in a time of 3:25.42. The other team members were senior Kyle Smith, junior Ryan Kennedy and freshman Carson Barnes.

There will be full stories and photos in Thursday's Signal. A photo gallery will also be available online Thursday.

Garcia won the 1,600-meter run for the third consecutive year. She ran 5:05.97 to win by nearly eight seconds over El Dorado's Laura Nightengale.

"That one felt good," Garcia said. "I was really, really nervous before this race. There was a lot at stake here, since she beat me earlier in the year at KT (Woodman). I'll take the win and time doesn't mean anything to me."

Garcia's last race will be the 800-meter run, which will start approximately 5:20 p.m. Nightengale will be Garcia's primary competition as she has won the 800 title two straight years.

1 p.m. update - Another gold medal was earned by the Baldwin High School girls' track team. It was the first of the day, but the second of the weekend.

The BHS 3,200-meter relay came from behind to win the Class 4A race. Junior Calleigh Durr led the Bulldogs off with the second-fastest split and handed the baton to sophomore Connor Twombly. Two laps later she gave the baton to junior Corinna Papps in third place. Papps passed the baton to senior Heather Garcia in second place, but around 50 meters behind the leader.

Garcia cruised for 600 meters, but turned on the jets during the final 200 meters and won the race by nearly 20 meters. The Bulldogs ran 9:41.09 in the victory, which set a BHS school record.

Senior Courtney Harris just finished the javelin event. She made the finals and placed eighth with a best throw of 123 feet, 4 inches.

The next event for Baldwin will be the 1,600-meter run. Garcia is the two-time defending champion in the event and will be looking to capture her third straight title. BHS will not compete again after the 1,600 until senior Dustin Schiller runs the 400-meter dash shortly after 4 p.m.

Results from the meet can be found at www.tickertiming.com. The Signal will update this story as races are completed. There will also be full stories and photos in Thursday's Signal.