Kitten, kitten, who needs a kitten?

As many of you may recall, several years ago I was looking for kittens. Alas, reason finally overwhelmed desire for a feline. I went on a three-year sabbatical from cats.

Wow, did that ever change. Quickly. 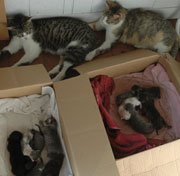 This is what the "maternity ward" at the Myrick farm looks like this week. Ettie, upper left, had her six kittens (in box below her) on April 23. Annie, upper right, followed suit late Friday or early Saturday with her litter of five (also below her).

About a month ago, I made a much-needed return to the country -- a farm place on 117 acres near Vinland. Another sabbatical ended. You know the saying. Farm livin' is the life for me.

The previous occupants had done the best they could to round up their 10 cats before moving. They came up short. Two eluded capture. By the time I moved onto the place, there weren't any cats there. It had been about a month that the place had sat empty. No cat food.

There were cats around, for sure. I spotted them along the nearby road and even saw a big, burly orange Tomcat in the massive back yard one morning. Got me to thinking I needed to get me a litter of farm kittens.

That didn't last long. After about a week at the place, a nice tabby with plenty of white started to approach the back porch. It was skittish, but eventually warmed up. I had just a smattering of cat food that I'd started to put out in a dish. The warm up hastened.

It hastened so much that it wasn't too much longer that I was lugging a 20-pound bag of cat food home. It was no longer a warm up. It was hot. The name Henrietta was chosen, Ettie for short, for what reason I don't know.

And, lo and behold, it wasn't too much longer after she'd adopted me I started to notice something. Oh, my, she was in a motherly way. As Ettie continued to grow and pound down more and more food, I got more and more excited about the prospects. Kittens! Lots and lots of kittens!

A farm isn't a farm without farm cats. Lots of farm cats.

Well, it wasn't too much longer -- a couple of weeks or so -- before that vision became even more of a reality. It was on a Friday when Annie showed up. She was similar in looks to Ettie, but had different markings, including quite a bit of orange. Another similarity? Yes, she was in a motherly way -- big time -- too. Oh, boy, here we go I thought.

Wasn't long, either. On that following Monday as I was sitting on the porch having coffee, up scampered Ettie. We have coffee together every morning. This one was different.

As she approached, I noticed she was carrying something in her mouth. I said, "Ettie, why are you bringing me a mouse?" She was in a hurry. I also quickly thought it sure was a big mouse -- and furry. About that time I heard a squeak from behind me. I said, "Ettie, aren't you going to kill that mouse?"

That's when it hit me. Oh, my God, she's having her kittens. I suddenly jumped into my best Dick Van Dyke imitation. You know the one, first-time expectant father needing to take care of new momma and babies. Yes, I was bouncing off the walls, getting a box and towels together for Ettie to lie in.

All was well and I headed to the office. By lunch time, I was dying to know if there were more. Went back to the farm. There were now four. All were well. When I got home that evening, there were six. The runt didn't look good and was having trouble nursing. He had a touch of orange in him. I worked with him for a couple of hours and he finally got the hang of it and is fine.

My excitement waned a little bit because there were no Toonces, the tabby cats that I consider prime. Oh, well, there was one Albert, an all-gray version that is a close second. There was a mixture, but mostly black, gray and white variations, with a smidge of orange thrown in.

The next few days were interesting and it became apparent to me that Ettie was going to be a good momma. She just really took to it. With first time moms, you never know. Annie was more than a little interested in the box of kittens, too, and would snuggle in when Ettie was eating or off doing whatever.

It was the following Friday night -- late I might add, pushing midnight -- when that took an interesting turn. I looked out and saw Annie in the box with Ettie and the kittens. It looked crowded and I thought it was odd.

Then it hit me again. Annie's having her babies, too! Back into Dick Van Dyke mode I went, securing another box and towels. Annie didn't seem interested. The next morning, instead of six kittens I counted 10 in what had become a mound of two mothers and lots of babies.

We went to town for lunch. When we returned about an hour later, much to my horror I saw a kitten on the porch floor. It looked dead. It was Annie's latest and, much like Ettie's runt, was mostly white and orange. It wasn't CPR, but we wrangled with it and it was breathing, but it was cold and wasn't interested in nursing at all.

That's when the cats were separated, Ettie into the new box with her six kittens and Annie left behind with five, including runt -- and, oh, yes, one Toonce! We worked throughout the day and evening trying to get runt to get a clue. On one check, I was surprised to find another Toonce. Two Toonces!

As good as that news was, it was tempered the next day. Despite the all-out efforts to get runt to nurse, they failed. Sunday morning, runt was gone. I mean completely gone. It wasn't in Annie's box. I imagine she took it elsewhere. Such is farm life.

But, here I am with 11 kittens -- 13 cats. From going from none to 13 in about a month, that sabbatical is long gone. It's great. Ettie's kittens now have their eyes open. Annie's won't be far behind. I've already got another bag of cat food and bigger bowls. I'll be super sizing those again when the kitties are finally up and around. Yes, it's exciting, but there is the reality of it all.

Anyone need a kitten? How about two?