Its branches signaled a warning to others. Through time it was known as Baldwin City's beacon -- a messenger. Tall and firm, bending with the extremes of the region's weather. 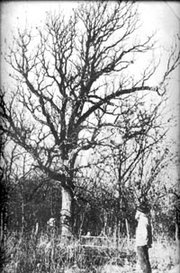 It conjures the good spirit of all that has made Baldwin City. Its memory serves as a beacon to the future.

But, for some, there is a question. Signal Oak is an icon of Baldwin City history, but why? The history is documented in local historian Katharine Kelley's brochure titled simply "Signal Oak."

Kelley's work cites numerous examples of the tree's storied history, but one -- from the Orange Blossom, a Baker University annual -- might sum it up best.

"During the time of the Civil War communication was slow. Neither the wires nor the air flashed a world's intelligence from coast to coast. Still, a lantern from the branches of the Signal Oak near Kibbee Cabin telegraphed a code of signs across the Coal Creek Valley to Blue Mound, where they were flashed in turn to Mount Oread at Lawrence and back again. Thus the settlers rallied when the ruffians came."

The site of Signal Oak, which is marked by a sign and a monument thanks to the work of dedicated local historians, is at the top of Simmons' Hill just north of Baldwin City. The hill is named for Dr. John Simmons, a farmer-physician whose home was at its brow, according to Kelley's work. She states: "He was also a benefactor of Baker University in one of its most difficult times when he mortgaged his farm for $500 and gave the money to save the school."

For those who haven't been to Signal Oak, take Vinland Road (County Road 1055) north to the turn east to Douglas County State Fishing Lake (County Road 12), then turn north again at County Road 1750. Follow the dirt road as it bends east, then north again. As the road turns east once again, stop.

There's the valley that Signal Oak stood atop for centuries. It is one of the most painted, photographed and viewed valleys in all of southern Douglas County.

The quarter acre at the crest of the hill where the monument and sign are locatedis owned by the Santa Fe Trail Historical Society. It was given to the society in 1987. It was purchased in 1974 by historically minded Baldwin City residents John Burns, a Baker professor; Ivan L. Boyd, another Baker professor; Amelia J. Betts; and Kelley. Their only stipulation when it was deeded to the society -- that "the land be left in natural state with no buildings or towers." So it is.

And why? Beside the red quartzite glacier boulder that marks the exact spot where the mighty white oak stood, donated by Hallie Cowles of Sibleyville, is the green and white historical sign donated by Zella and Chauncey Gorsage in 1988. But, there's more. Much more. Kelley explains:

"The view from Signal Oak is magnificent. It overlooks three valleys -- the Coal Creek, Wakarusa and Kaw (or Kansas). Mount Oread, where Kansas University is located, is seen to the northwest. Blue Mound and Bald Mound (once known as Willey's Mound) are straight north. The farm adjacent to the Signal Oak site on the north is the former Bishop William Quayle's farm that he laughingly called 'my farm that stands on end.' The woods to the north and northwest of this farm are known as the Bridenthal and Rice Natural History Preserves. To the east of the Rice tract is the recently acquired Baker University Nature Study Area.

"A short distance to the east of Signal Oak is the site of Kibbee's Cabin. Later this area was the site of the Barricklow Cabin. Here two historic events took place. On July 9, 1854, a group of settlers gathered in the Kibbee home to hear a sermon preached by Dr. William H. Goode. This was the first sermon delivered to white settlers under the auspices of the Methodist Episcopal Church. Dr. Goode had been commissioned by Bishop E.R. Ames to preach the gospel to the settlers of this new territory. Later, when Barricklow built his cabin, a convention of Methodist ministers met there and voted to establish Baker University in Palmyra.

"On June 7, 1909, the Kansas Methodist Historical Society erected a monument of red quartzite glacial boulders on the spot where the Kibbee and Barricklow cabins stood. A plaque tells the story of the first sermon preached to white settlers in Kansas. A replica of the old cabin is now located on Fifth Street just north of Old Castle near the Baker University Sports Complex. It was built by three old-timers -- Ralph Gilman, Otto Spitzli and George Pence."

But possibly the most important information about Signal Oak to us today came during its demise in 1914. The tree was dying and needed to be captured forever. The Topeka newspaper printed the following comment and poem on June 25, 1916, and it stands today as the best remembrance of the stately oak.

"The Signal Oak which stands on a knoll between Lawrence and Baldwin (Old Palmyra), played an important role in Kansas border warfare. On July 4, a celebration will be held in Baldwin to commemorate the events of 1856, and the old tree will have a part in the play that will be produced at that time. The Signal Oak is dying now but Mr. Markam has sought to embalm its memory in verse."

God planted an acorn on the crest of a hill,
Where the foot of mankind never trod.
'Twas done in the night when the wild winds where still,
And the showers had loosened the sod.

It grew to full stature as the seasons made years,
And its branches gave all kindly shade;
The buffalo halted there -- also the deer
When hot pressed by the Indian raid.

It stood there alone without friend in the strife
To give companionship, sweet and secure;
The storm gnarled its branches, but strengthened its life
For tasks that through ages should ever endure.

When man from the North came o'er the great plain,
A home to secure where the oppressed might fly,
They found the oak standing alone in the rain,
A shelter and sentry when danger was nigh.

The battle was on, the strife was severe,
The raiders were coming with shot and repine;
When lantern on arm of old oak did appear,
And cast its red light far down the ravine.

Men rushed from their cabins; their guns they carried
On horseback, afoot for they saw the light's sheen.
They repulsed the marauders and the slain were buried
Where the shade of the oak could daily be seen.

But now the tree's gone -- we know not its years,
A guardian it stood in days dark and fair;
The aged ones whisper and smile through their tears,
"God had a plan when He planted it here."